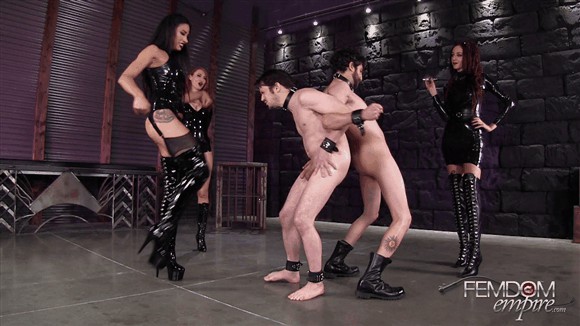 The Mistresses of AVN 2017 kick off the week right with a pain party! Mistresses Kendra James, Sablique Von Lux, and Goddess Tangent have a very fun party planned, well at least fun for them. Two slaves have been chosen to be the victims of the las sadistic games. Nothing spurs on a Domme’s wickedness quite like being able to show off her cruelty to her peers. The slaves are viciously abused as the las compete to see which one will break first. The Mistresses subject the slaves to harsh beatings; with a crop, slashing strokes of a single tail whip, and brutal ball bustings. They are kicked full force over and over again. The las delight at the slaves howls and groans of agony. The cruel sadists egg each other on to new heights of punishment.