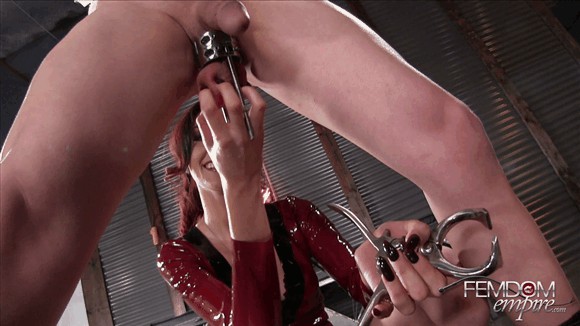 Amazon Goddess Sablique has her wimpy little slave right where she wants him – bound, helpless and frightened out of his wits. She is not pleased with her slave’s recent performance and intends to punish his failures in the worst possible ways. As she towers over her cowering victim with a massive dildo strapped on she threatens to emasculate him with a burdizzo, a gelding tool for livestock. The slave is nearly in tears as he frantically begs to be allowed to keep his balls. She is not impressed. To prove her point she viciously violates his ass with her huge cock while he whimpers pitifully and at her insistence thanks her for all the abuse. Not yet satisfied she turns her attention to beating his ass cherry red while threatening him with his nullification to come. Her slave has no choice but to endure the pain as she returns to ruthlessly ruining his ass with her giant cock. For the slave it is a terrifying ordeal, but by the smirk on her face it is clear that Sablique is enjoying his tormented terror. She leaves him bound and exhausted to contemplate his neutered future.